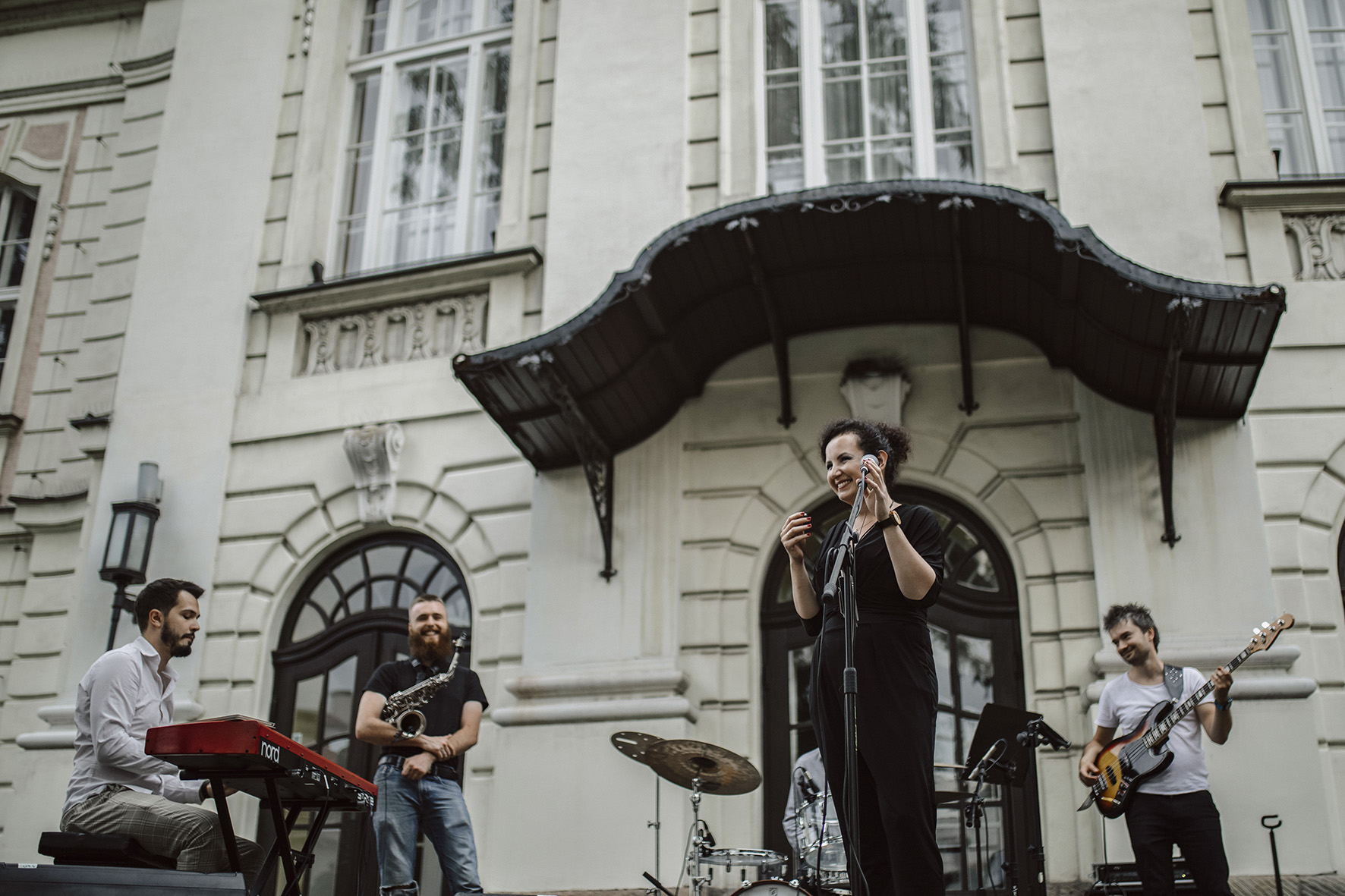 Małgorzata Kujawska-Zemła – singer and executive producer. Main sponsor of all Klamka’s commotion. She developed her vocal workshop at the Kraków School of Jazz and Popular Music. Participant of the Jazz Workshops for Adults in the class of Dorota Miśkiewicz and Anna Serafińska and the International Summer Jazz Academy in Kraków in the class of Lora Szafran. Member of the Management Board of the MIX Association of Vocalists and Singing Teachers in Gliwice. 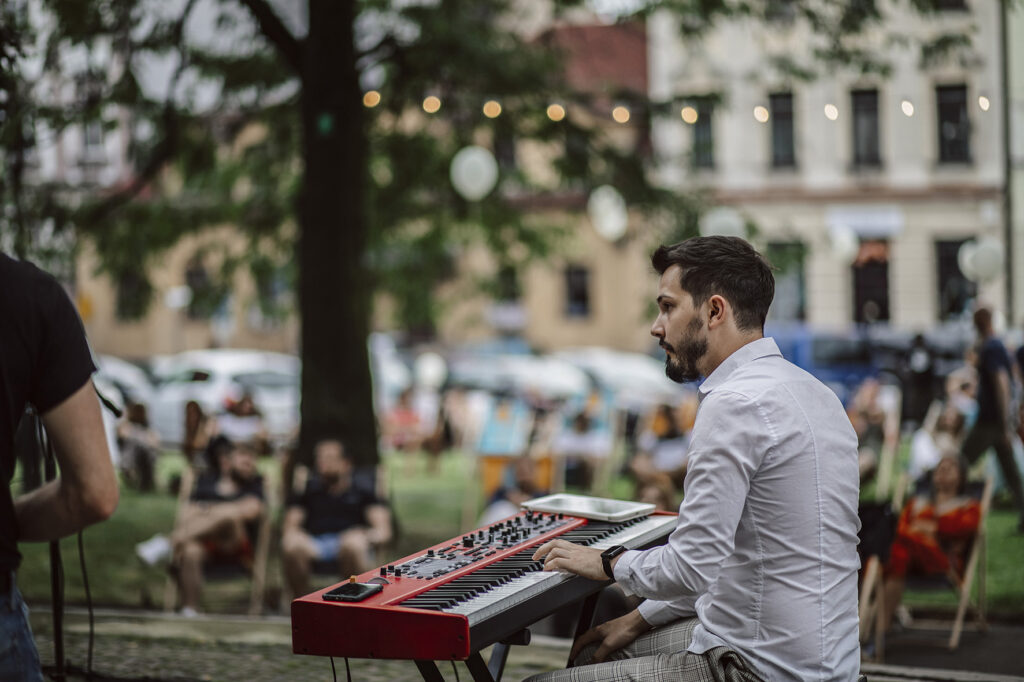 He collaborated with such artists as: Joszko Broda, Mariusz Kiljan, Łukasz Golec, Paweł Golec, Krzysztof Dziedzic, Maciej Miecznikowski, Robert Szewczuga, Peter Somos, Piotr Wróbel (musician), Franciszek Pospieszalski, Dima Gorelik, Urszula (vocalist), Apostolis Anthimos , Krzysztof Daukszewicz, Sasha (singer), Cabaret Czesuaf, Marcin Hałat, SIS. He has been playing in the Akurat band since 2016, in 2017 he started working with Joszko Broda, and in 2019 he joined the Psio Crew group. In 2020, he recorded “Tribute to Chris Cornell” with the singer performing under the pseudonym Klamka. He is the author of all the arrangements, productions, electronics and piano on this album. 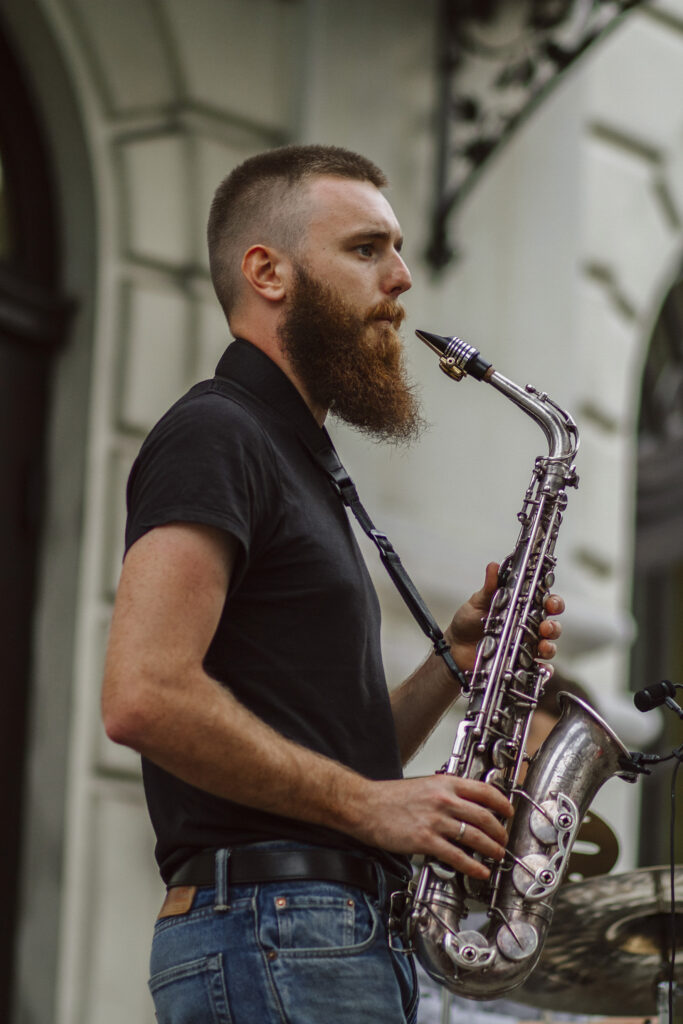 He began playing the instrument at the age of 10 at the 1st and 2nd degree Stanisław Moniuszko State Music School in Bielsko-Biała. Very soon, in addition to learning to play classical music, he began learning jazz and popular music. He has numerous festivals and concerts with school bands, incl. a saxophone quartet and a Big Band. The first “private” band he started touring with was the JazzUp sextet, in which he played the saxophone and ewi. In 2013, the band won the Grand Prix in the School & Jazz Festival in Lubaczów. In 2015, he graduated from the saxophone class at the Music School and began studies at the Academy of Music in Krakow. After the first semester, he left for the United States to study at Berkeley College of Music, but was unable to continue his studies due to finances. However, he joined the class of one of the most outstanding jazz saxophonists – Rosario Giuliani, at the Saint Louis College of Music in Rome. There he completed his first degree studies. He is currently studying at the Academy of Music in Katowice and working on his own projects.

He collaborated with such artists as: Krzysztof Dziedzic, Robert Szewczuga, Rosario Giuliani, Stefano Minder. Occasionally he performs with Big Band Małopolski, the band Swing Like That. He is a co-creator of the Christmas carol project “The Most Beautiful Polish Christmas Carols”. In 2017, he released the album Broszczakowski / Kuzak, which he is a co-author and performer of. In 2020, he appeared on the album “Tribute to Chris Cornell” with the singer performing under the pseudonym Klamka.

Piotr Mędrzak – guitarist, producer, sound engineer. Co-founder of Red House Studio Recordings in Nowa Wieś near Kęty, where Klamka’s album was recorded. For many years he has been working with Urszula, SIS, he also has a solo project: Mendra. On Klamka’s album he is responsible for guitars, production and sound engineering.

Patryk Bizukojć – bass player, session musician. A graduate of the Karol Szymanowski Academy of Music in Katowice, majoring in jazz and stage music. 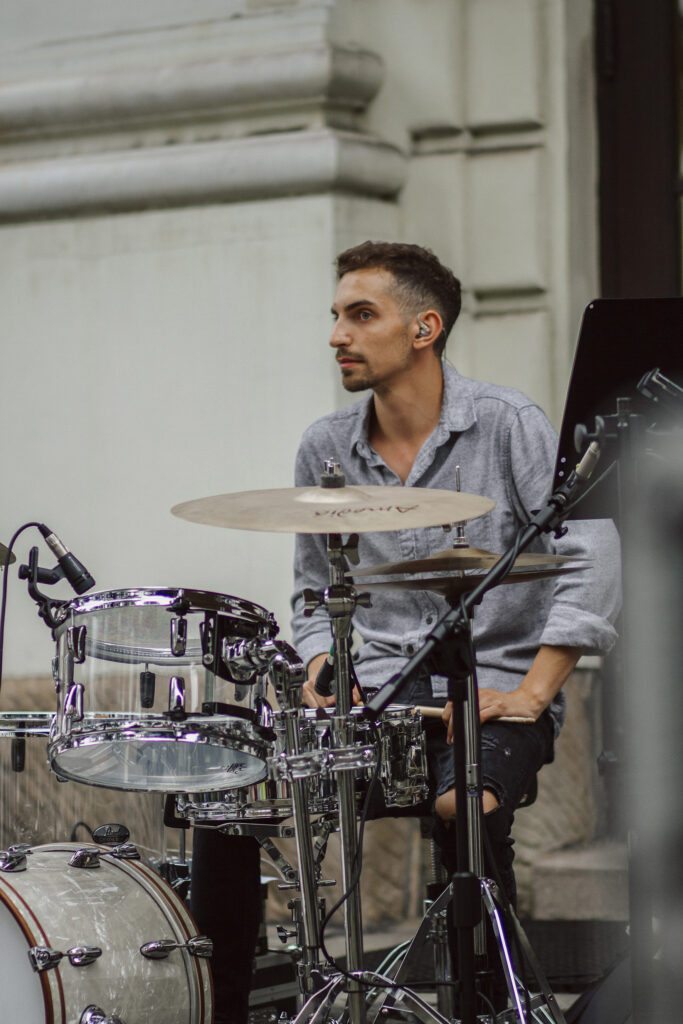 In 2007, he started learning to play the drums at the 1st degree Karol Szymanowski Academy of Music in Oświęcim in the class of Mirosław Sporysz, MA. In 2010, he continued playing the drums in the Stanisław Moniuszko Complex of State Music Schools in Bielsko-Biała in the class of Andrzej Ziętek, MA, where he began his adventure with jazz music, playing in the school bigband and joining the school band “JazzUp”, with which he won the Grand Prix in the School & Jazz Festival in Lubaczów in 2013. He developed his drumming also by going to percussion competitions. He is a multiple laureate of the “Drum Battle” percussion competition in Legnica, where in 2014 he won the 1st and in 2015 2nd prize in the category of playing the drum kit. In 2016, he graduated with honors from the Stanisław Moniuszko State Music School in Bielsko-Biała.

He collaborated with, among others: Joszek Broda, the Beethoven Academy Orchestra, Kasia Pietrzko, Psio Crew, Jovi, Basia Dratwińska and the Raspberry Hills band with which in 2016 they released the album entitled “It seems to be cheap.” He played at such festivals as “Bielska Zadymka Jazzowa”, where in 2018 he performed with the bands: Dawid Broszczakowski Sextet, Kasia Pietrzko Trio, and Czechowice Rock & Blues Festival “in the musical Chacharnia with the Raspberry Hills band. Since 2017, he has been playing in the “Amirova Trio” band, since 2019 “Atlantyda La5er”, and in 2020 he started working with the “Klamka” band. Apart from regular projects, he is often active on stage or in the studio as a session musician. Currently, he is also a percussion teacher at the “DoubleTime” music center in Skawina and studies at the Academy of Music in Krakow in the percussion class of dr hab. Łukasz Żyta and dr Wojciech Fedkowicz.

The Klamka project is created by positively crazy music enthusiasts, good friends who feel very comfortable and at ease in their musical company.

You can also find us here: